The book of Time

Time stood still.
Rooted to the past,
clouded in the future.

Time opened its eyes.
A new horizon.
A black swan vision before it.

Time stood up.
Took the leap,
but did not fall.

Time took a step.
Bonds were forged.
Two Souls are now one.

Time sat besides her,
looked at the view.
Together forever.

and ALWAYS
Formulated by Mohamed Karolia at 9:43 pm 3 comments:

When you reach the End....you start to think about the Begining and if it was all worth it

Take it back to zero, not one but Zero
The Lone Writer
Formulated by Mohamed Karolia at 9:11 pm 1 comment:

Email ThisBlogThis!Share to TwitterShare to FacebookShare to Pinterest
Thought Suey ramblings of an ulcerated mind 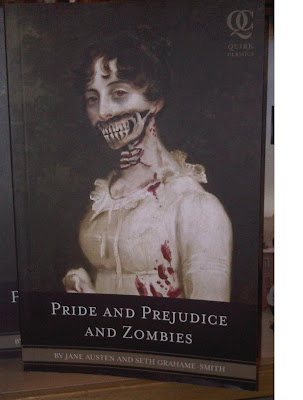 Whats next ? Macbeth and the Deadly Ninja's ? And you can buy it from Exclusive books for R128.00. Must be Honest im very tempted to get this
Formulated by Mohamed Karolia at 4:46 pm 4 comments:

Email ThisBlogThis!Share to TwitterShare to FacebookShare to Pinterest
Thought Suey Zombies are taking over....

Another sporadic post ! Months without a thought and then boom I somehow find the time to post a rambling or two. I'm sure no one really waits with baited breath for the next literary "gem" I will produce after months of hibernation but hey what the heck I'm going to post something whether it be noteworthy or not because "its my blog and ill post if I want to, post if I want to" (ala Cyndie Lauper)

So this is my 100th post ! Wow I can't believe it and I'm shocked and all the usual jazz people say at acheiving a milestone. A year or so back when my bloging was on top form 100 posts would have been a walk in a park but nowadays where life has gotten too hectic time is a rare resource. Though an addage somes to mind whenever I tell someone that I never have any time, "How can you have time if you never make any time?". This does ring true but for some of us who are mere mortals it seems an impossible task, but I am working on it.

Now that I've gotten the happy 100th celebrations out of the way with the grace and poise of "Migrane Boy" (those familiar with MTV during the 90's will be familiar with Migrane Boy) I shall move swiftly to the point of annoyance.

I think for most South Africans our experiences at stop streets or traffic robots is the same; we stop and then a beggar of varying age and disrepair appears at our window asking for something or washing our windows....am I right ? Yes I am. Now I understand that we become annoyed at the constant requests for change and help that pour our way but why throw common decency out of the window. I've noticed it a couple of times where drivers don't even make eye contact with the indigent in question and merely shift their car a bit forward or in one case actually swore at the beggar. Now I'm not saying that you should give them something all the time. All I'm saying is atleat give them the decency of looking them in the eye and then telling them "no" that's the least they deserve. I think we very easily forget that these peeople are in fact just as human as we are and that they are not sub citizens or ghouls to be shunned at. So please if you can't help atleast give them the charity of a smile. Ok so that was my point of annoyance which to me made sense but may in fact be a load of BS !

I shall return hopefully sooner rather than laters, don't hold your breath.

This was typed on my phone so I apologize for any spelling or grammar problems.

There is always shadow when there is light
The Lone Writer
Formulated by Mohamed Karolia at 10:59 am 5 comments:

Mohamed Karolia
Johannesburg, Gauteng, South Africa
I've spent eons studying the ancient and the modern, the beautiful and the ugly, the macro and the micro and good and evil. I've travellled the globe far and wide and have experienced world events past and present from the comfort of my chair flicking through channels as fast as life passes me by. My legacy is my own and so is my mind and that is what I would like to share with you. So please spare a thought.

A Cut Above the Rest